On Twitter we read today “I’ve got 99 problems but Crypto ain’t one”, understandably with the Ethereum merge which happened earlier today (15 September 2022), as it transitioned from proof of work to proof of stake, meaning 99.5% more energy efficiency for minting and NFT transfers. Welcome to the new paradise for NFT artists and NFT collectors multiplying by the second.

One would say this is a great day to release an NFT drop and that’s what the well-calculated British photography artist Dan Holdsworth will do later today on elementum.art. Holdsworth is releasing three different artworks, which have been curated by art gallerist Christina Scheublein, from his acclaimed series “Continuous Topography” and his latest body of work titled “Acceleration Structures”.

“Of course, digital artifacts stay the same forever. I like the fact that an NFT is part of an interactive archive of the artworks in which collectors can participate more actively.” —Dan Holdsworth.

For almost twenty years, British photographer Dan Holdsworth has been blending art, science, and nature to produce photographs which challenge our perceptions and reinvent the notion of landscape. He has been studying many glaciers around the world, notably in Iceland, the Alps and more recently post-glacial rock formations in the Jura. Dan Holdsworth works together with a geologist to gather millimeter-perfect data. The latest photogrammetric and geo-cartographic innovations make it possible for hundreds of photographs taken from a helicopter to be meticulously compiled and plotted using GPS coordinates. The result is 3D imagery called “Continuous Topography” of a mountain in an unprecedented level of detail. However, despite being deeply informed by the uses and applications of the newest technologies, Holdsworth’s work refers openly to the history and tradition of landscape photography and mapping. 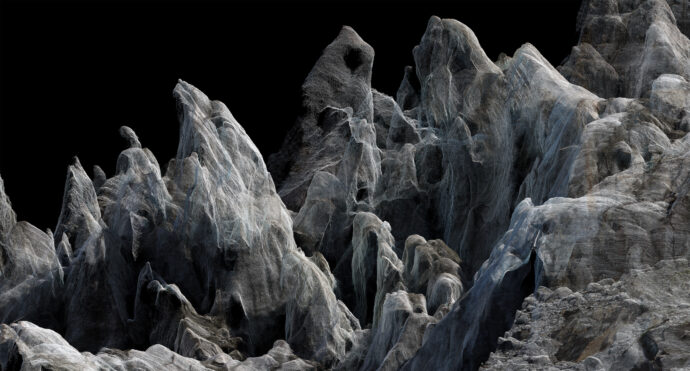 Through his use of digital mapping data, Holdsworth expands the photographic process to develop a new aesthetic language that explores the changing nature of human perception in relation to that of our evolving science and technologies, at the interface of the geological and the virtual.

Dan Holdsworth’s “Acceleration Structures” allows us to see Europe’s most sublime landscapes in radically new ways. The artist reveals the structures of three Alpine glaciers that artists have attempted to capture for centuries, namely Argentière, Bossons, and Bionnassay.

“Acceleration Structures” continues his project to reveal unseen parts of the world, through an innovative form of ‘cameraless photography’ called ‘photogrammetry’. These three-dimensional wireframe models are created through a combination of intense fieldwork where the artist documents every square foot of a particular area; and through a pioneering use of high-end software that correlates the measurements of each patch of land between them. From these measurements, the artist can create a model of the site in virtual space. Holdsworth asks how humans have shaped and will reshape the land with a forensic eye; and yet “Acceleration Structures” offers a kind of poetry of data that is completely unique to our time. This work is entirely of the twenty-first century; and yet remains rooted in the history of photographic explorations of our planet.

Dan Holdsworth was born in Welwyn Garden City, UK, in 1974, and studied photography at the London College of Printing in London. Exploring the intersection between art and science, Holdsworth has been working since 2010 in collaboration with the Northumbria University department of Geology. His work has been featured in international solo and group exhibitions worldwide, including the BALTIC Centre for Contemporary Art, Gateshead, Centre Georges Pompidou (Paris), Tate (London). His work is held in major international public and private collections including, The Denver Art Museum, Tate (London), Victoria and Albert Museum (London), Centre Georges Pompidou (Paris), Mumok (Vienna) and the Goetz Collection (Munich).

Find out more about these works visit elementum.art

The NFTs are included in the group exhibition “Digital Landscapes” which will be on view until 30 September at unpaired gallery in Zug.