The title of the show “Liebe Maschine, male mir” references Martin Kippenberger’s iconic 1981 exhibition “Lieber Maler, male mir” which has had an enormous influence towards the evolution of conceptual contemporary art and painting. Similarly, in “Liebe Maschine, male mir” the artist sets the stage by programming an algorithm, while the machine delivers the output. Controlled coincidence can play a significant role, and unforeseen disruptive factors can occur at any time.

Based on the theories of Max Bense and Abraham Moles, the first generative works of art were created in the 1950s and 1960s. One of the founding fathers of computer art is Frieder Nake (a former student of Max Bense), who designed his first programmed plotter drawings at the Technical University of Stuttgart in 1963 and visualized them on the “Graphomat” (ZUSE Z64) drawing machine. Nake dedicates his Genesis NFT “Homage to Gerhard Richter”’ to the painter of the century, Gerhard Richter, in his most recent work of art. One of Frieder Nake’s best-known works is the “Hommage à Paul Klee”, which was created in 1965 and paid tribute to the Bauhaus artist by the principle of chance. “Chance is better than me,” Gerhard Richter was once quoted when he made colour charts based on algorithms. In Frieder Nake’s hommage, an algorithm continuously generates Richter’s striped images in endless variations.

With similar virtuosity, Frieder Nake’s contemporary Hein Gravenhorst creates psychedelic digital transformations. Along with Gottfried Jäger, Pierre Cordier and Kilian Breier, Hein Gravenhorst is one of the co-founders of generative photography and, in the 1960s, Hein Gravenhorst developed photomechanical transformations that were created through countless exposures in the darkroom. His most recent works have transformed these patterns, reminiscent of mandalas or medieval rose windows, into hypnotic computer animations.

One of the recent pioneers of digital art is Alexander Mordvintsev, who conducts scientific research at Google on visualizing deep neural networks. The artist became well known for his invention of the Deep Dream algorithm, a special form of artificial intelligence that he launched in the summer of 2015.

In the “Liebe Maschine, male mir” group exhibition, Alexander Mordvintsev will present a new body of work from his latest series titled “Autumn Life”. The visuals are created by a cellular automata based artificial life simulation and are inspired by the autumn forest and its delicate inhabitants. 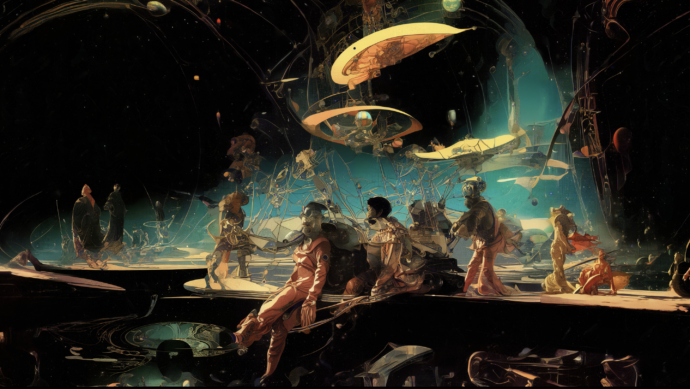 Image: Ganbrood, “In this hard rock, whiles you do keep from me”

Like every artist is expanding on the work of their most revered predecessors, In ‘S O M N I V M’, Ganbrood uses visual themes that have always inspired him since his youth: mythology and fairytales, theater and film, painting and photography, video games and comics. Drawing parallels in timeless variations of visual narrative by seeking their mathematical interfaces in latent space. Where a classically trained artist like a painter or a sculptor would dig these shapes and symbols from memory, Artificial Intelligence is providing the present-day artist with the tools to draw references from synthetic storage, where the craftsmanship of brush and chisel are shifted to recognition and curation of artificial outputs.

Artificiality has always been a decisive element in Ganbrood’s past work, whether using special effects and 3D animation for film or photographing actual events in a serene way that almost looked staged. Always fascinated by illusions and trickery, Ganbroods ‘oeuvre’ is a voyage of exploration into pseudo-figurative and mind-altering effects like pareidolia, apophenia and synchronicity.

This exploration takes an almost literal shape in “In this hard rock, while you do keep from me” and “This Island’s Mine”, where sci-fi elements of glorious space adventures meet Renaissance scenes. Set in a cinematic universe, the viewer can almost define the actors and decor of those who, after close inspection, turn out to be little more than abstract shapes. “Tragoidia” and “Les Filles du Roy” are like stages. The elements of contradictory mediums like fresco paintings and photography or 3D are battling for the spectator’s conclusion of how to interpret what is perceived. 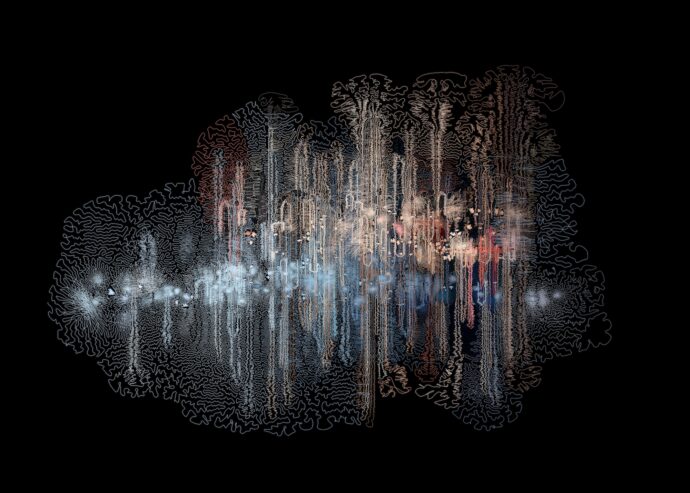 Kluge’s portraits are monumental and structural, reminding us of the sculpture of Russian constructivists like Naum Gabo and Vladimir Tatlin. But in contrast to the somber colours of the constructivist movement, Kluge’s works play with vibrant colours, where he questions the object and its characteristics, where vector-based lines serve a particular dynamic to describe the persona. Espen believes that the quality of each of his portraits comes from the fact that he writes by hand a new version of his algorithm for every portrait in pure Javascript. His code takes photographs as input, loops through all the pixels in a raster image, chooses some at semi-random, and then engages those pixels by putting lines between them.

As a continuation of his experiments with the same data over the last three years, Espen developed a new algorithm that created a new set of works, the Lyrical Convergence. Espen attempts to visualize the inner kismet of the Alternatives portraits with this new growth algorithm. In contrast to the original series’s geometric structure, the result of the new sequence presents an organic-looking abstract form expressing intangible sensations. The monochromic background, the centralized shape, the united lines, and the neat, calm colour palette are reminiscent of the art of Georges Mathieu, one of the fathers of lyrical abstraction.

The artist adapts the immediate and direct approach to the new algorithm that brings the subject’s position to the object into question. Espen exalts it with the projection of his code with the coherent intensity to which the algorithmic execution of fragmentary castellations of lines, fields and colour imparted a maximum objectification. He makes it a place almost independent of the artist’s existence, the code, and the manifestation of art itself. His series Lyrical Convergence is insemination in which subjective and objective, rather than being considered antonymous, hold a dialogue and form integration. Like the European abstractionists, Espen’s works express something personal, vibrant, and entirely imaginative, in other words – lyrical.

elementum.art NFT Gallery | Zurich Airport, the Circle 18
The elementum.art NFT Gallery is a place where people want to go, meet up and spend time to immerse themselves into digital art experiences. Whether it is a place for the NFT and art community to connect, or for art lovers and visitors of the Circle at Zurich Airport to explore the elements of NFTs and digital art.

Spanning over 380 square meters, the elementum.art NFT gallery is situated at the Circle 18; a two-minute walk from Switzerland’s largest international airport renowned for its quality of stay and for high-end shopping and dining experiences. Our immersive space will not just reflect the zeitgeist, but will also foster an understanding of our historical past with historical NFTs and from the perspective of present circumstances, with a view towards the future. We have planned a diverse programme; through networking events, talks, and exhibitions, evolving around the topic of digital art and showcasing a range between historical NFTs and releases – as well as live mints.